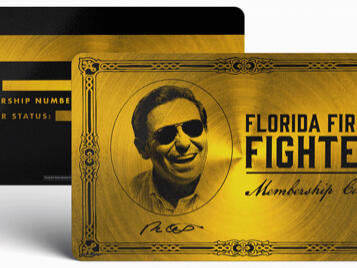 The invitation directs recipients to a registration page on the Governor’s political fundraising page, where they can join a supposedly exclusive group with only 100 members. The main benefit of this membership appears to be that they will receive a gold “Freedom First” membership card to carry in their wallet in return for regular and large financial donations to his re-election campaign.

It’s unclear how many of that club’s 100 exclusive places remain unoccupied, but given the amount of money already raised by his organization, that may well be beyond the reach of all but the wealthiest donors.

According to Ballotpedia.org, the DeSantis organization raised more than $100 million in 2021, eclipsing the war chests of Democratic challengers Charlie Crist and Nikki Fried who both raised less than $10 million.

Beat Trump at his own game?

Supporters of former President Donald Trump may recognize the gold card campaign – earlier in April, the Trump Political Action Committee launched its own gold card system for its most enthusiastic donors.

While Trump is renowned for seeking as much media coverage and public attention as possible, it appears Governor DeSantis and his team members are looking to emulate and build on the same model. It seems that in DeSantis’ mind, all publicity is good publicity!

That DeSantis is again following Trump’s lead in his methods is another suggestion that he may have ambitions beyond re-election as governor. There has been repeated speculation that he intends to run for president in 2024, which seems to deeply annoy former President Trump.

It has since begun offering other merchandise related to the song “Sweet Florida” written and performed by the Van Zant brothers as a tribute to the Governor.

Money from the sale of beer coolers and t-shirts is only a small part of his fundraising machine, however. Many who qualify for the gold card program will likely have donated hundreds and thousands of dollars. Indeed, DeSantis’ largest individual donor is Ken Griffin, the CEO of Citadel Investment Group who donated $5 million to the DeSantis organization in 2021 only.

Would you like to sign up for the “exclusive” gold card offered by Ron DeSantis? Are you surprised at the amount of money the Governor has earned from political fundraising? Let me know in the comments section below.